8 female Bollywood characters that deserved to be treated better 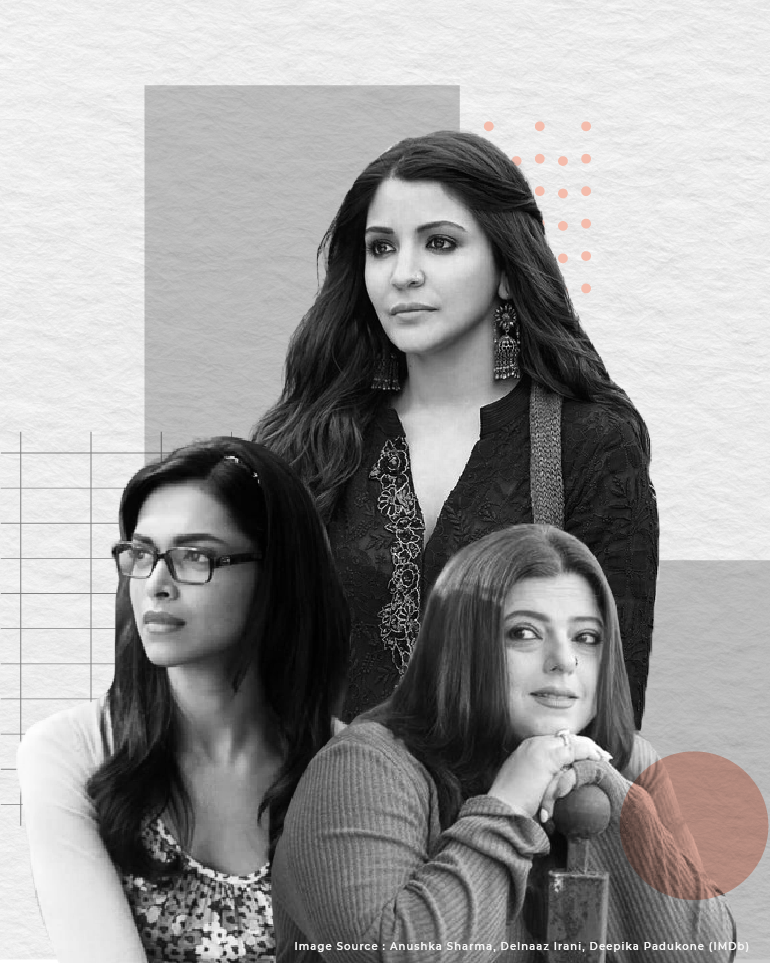 To say that Bollywood films have and continue to have a deep impact on us would be an understatement.

Many of us have grown up on a healthy dose of Bollywood – every song, every iconic dialogue, and every hook step has been a big part of our lives. Whether it’s Anjali from K3G or Naina from Kal Ho Na Ho, we see parts of ourselves represented in the form of unforgettable characters.

But so many of these characters have been unfairly represented.

From being given terrible character arcs to having little screen presence, female characters in particular could be written better. And this isn’t just observation – the O Womanya! Report of 2022 seems to concur.

Among the many parameters judged in this report – it is a bird’s eye view of women’s representation in the film industry – the report addressed the talk time of female characters in film trailers.

Unsurprisingly, it was seen that female characters received only 25% of the talk time in trailers, out of which 48 titles analysed gave them 10 seconds or less (to read the entire report, go here).

If this is the case in 2022, our disappointment is justified.

So, without further ado, here is a list of some of the many female characters in Bollywood who deserved so much better than the cards they were dealt.

The whole premise of Cocktail was that the guy, Gautam (Saif Ali Khan), would date the bold, sexy, hot mess that was Veronica (Deepika Padukone) and would gradually fall in love with her friend, the wholesome, homely, ‘nice’ Meera (Diana Penty).

When Veronica falls in love with Gautam (which was unexpected because she was a casual-relationships-only kinda gal), she attempts to be more domestic and homely to be accepted.

When she is rejected, she goes down the path of absolute self-destruction.

Veronica’s estranged relationship with her father is barely addressed. Despite her best efforts and attempts at vulnerability, Gautam ends up with Meera and Veronica becomes the sacrificing third wheel. She deserved infinitely better.

A woman wanting an abortion because she cares about her career more? Blasphemy.

Sonia Roy’s role in Aitraaz is an interesting one. Raj and Sonia (played by Akshay Kumar and Priyanka Chopra) have an exciting relationship which goes awry when Sonia gets pregnant and decides to get an abortion against Raj’s wishes. While the story is an interesting take on power and violence, Sonia’s life is defined by a decision she made years ago, and she is shown to truly regret it. Sonia resorts to assault and a false rape case to get what she wanted at a later stage in her life – a baby, which is completely acceptable – and her failure to win the case leads to her suicide.

To show that a woman who desires money and fame over a family deserves to be punished is deeply problematic. Needless to say, Sonia deserved better.

For all the Channa Mereya fans out there, I’ll have you know: Ayaan (Ranbir Kapoor) may have been a good musician, but he was definitely a toxic person.

Alizeh (Anushka Sharma) was clear about her feelings for him all throughout, but all she ended up doing was dodge Ayaan’s consistent confessions of love to her.

Every meeting turned sour because Ayaan couldn’t deal with Alizeh rejecting him; so badly did he want her to believe they were meant to be together that he didn’t spare her even when she was dying.

Alizeh deserved a friend who wasn’t constantly complaining about being friendzoned.

It’s safe to say that the women in Ae Dil Hai Mushkil weren’t exactly having a great time in the film. Ayaan was not only awful to Alizeh – where he was constantly making everything about him and ignoring her feelings – but in the process of moving on from her, he ended up dating Saba (Aishwarya Rai Bachchan) and broke her heart too. He treated her as nothing more than a rebound, a distraction.

He continued to pursue Alizeh even though he was with Saba, and this led to Saba breaking up with him. Can you make up your mind, Ayaan?

This should probably have been on top of the list. 90s kids everywhere continue to be disappointed with Kajol’s portrayal of Anjali, a tomboy, who fell in love with her best friend, Rahul (Shah Rukh Khan).

Not only did Rahul completely ignore Anjali when she was in her tomboy phase – sporting short hair, playing sports, wearing masculine outfits – but he started noticing her years after she had gone away. Now, she was wearing sarees and sporting hair that went all the way down to her waist.

The scene where Anjali attempts to dress up like Tina (Rani Mukherjee) and is bullied for not looking ‘good’ enough is particularly difficult to watch.

Kuch Kuch Hota Hai did a disservice to young girls by teaching them that being conventionally feminine – demure, mysterious, dainty – was the only way they would get a boy’s attention. Anjali was perfect the way she was, and Rahul should have seen her as such.

Bunny (Ranbir Kapoor) had big hopes and dreams. He wanted everyone around him to support him unconditionally, regardless of whether he was there for them. Naina (Deepika Padukone) fell in love with him, but he prioritised his desire to travel the world and leave his life behind. While that is acceptable, it’s only when he sees Naina 8 years later that he realises what he has missed.

Not only that, Bunny encroaches her space and acts hostile towards Naina’s friend because he was jealous.

To expect someone to be waiting for you for years is bad enough; the concept of a woman bringing stability to a grown man's life is also a tired cliche. Naina deserved better.

There is absolutely no debate that Sweetu (Delnaaz Paul) was an adorable character in the popular film, Kal Ho Naa Ho. She was funny, confident, and a great friend to Naina (Preity Zinta). But the same cannot be said about Naina.

Naina was constantly mean to Sweetu and would fat-shame her at every chance she got.

Naina’s jaded perception of love was a hindrance for her, but she often projected it on the sunny and happy Sweetu by telling her that she wouldn’t find love as a fat person and would be miserable even if she did (which turned out to be false – we all know and love Frankie Ramdayal!). Naina was selfish and mean, and Sweetu deserved a better friend.

This goes without saying. Preeti (Kiara Advani) is a reflection of many women who equate violence with love, often because that’s what we have been taught.

Preeti endures Kabir’s constant attempts at claiming her and gradually starts reciprocating, which glorifies intimate partner violence and normalises it.

A man going off on everyone around him due to his anger issues is completely acceptable in society – something women have not been given the privilege to do. Preeti deserved to be more than just a subservient girlfriend and wife to Kabir, and she deserved to find love that wasn’t physically and emotionally draining for her.

There are several more female characters that could have made it to this list, but we’ll leave you with these 8. Female characters in Bollywood movies deserve better treatment and character arcs, and we can’t wait for better stories to arrive on our screens.