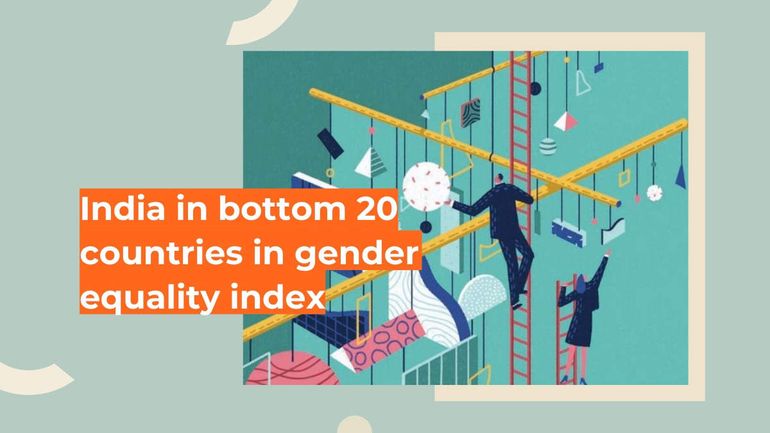 The World Economic Forum has released the annual Global Gender Gap Report 2021, and the numbers reveal a worrying widening of the gender gap in the last year, across the globe. India, in particular, has fallen by a whopping 28 places since 2020, to rank 140th among 156 countries. This puts India firmly in the bottom 20 countries, and the third-worst performer in South Asia.

It’s no revelation that the pandemic and all the social, economic, and political crises it brought with it, have impacted women on a disproportionate scale. The latest data in the World Economic Forum’s report only solidifies this fact.

The South Asian region is one of the worst performing regions in the report, followed only by the Middle East and northern Africa.

The report says that India’s large gender gap decline has contributed significantly to the poor performance of South Asia. “Because of its large population, India’s performance has a substantial impact on the region’s overall performance,” the report states.

On the political empowerment sub-index, India has gone down by 13.5 percentage points. This can be seen in the significant decrease in the number of women ministers in India. The number fell from 23.1% in 2019 to 9.1% in 2021. The share of women in India’s parliament has remained unchanged at 14.4%. India ranks 51st among the 156 countries listed, in this area.

On the economic participation and opportunity subindex, India’s gender gap has widened by 3% in the last year. It is now in position 151 among the 156 countries on this index.

On the health and survival sub-index, India is second-last. It’s followed only by China, ranking 155th on the list of 156 countries. The report reveals that there exist gaps in sex ratio at birth due to continued use of gender-based sex-selective practices. According to the report, more than one in four women in India have faced “intimate violence” during their lifetime.

The report reveals that 96.2% of the gender gap in the educational attainment sub index has been closed! It has found that parity has been largely achieved in primary, secondary and tertiary education. Even then, gender gaps still exist in terms of literacy. 34.2% of women are illiterate in India, as compared to the 17.6% of men that are illiterate.

The Gap Between Women And Work In India

On the work front, women’s labour force participation rate fell from 24.8% to 22.3%.  According to the report, women working in professional and technical roles has fallen to a mere 29.2%.

The share of women occupying managerial and other senior roles remains distressingly low at just 14.6%. The median number for this across all the countries is 33%.

The number of firms with female top managers is only 8.9%. Comparatively, women make up 45.9% of board members in a top-ranking country like Iceland.

Firmly contradicting the increasingly loud assertions that the “wage gap is a myth”, the report reveals that the estimated income earned by women in India is only one-fifth of that earned by men. This makes India one among the bottom 10 countries worldwide, on this indicator.

Attaining Gender Equality Has Been Pushed Back By A Generation

The report confirms that the worst hit sectors during the 2020 lockdowns were “those where women are more frequently employed.”

“Combined with the additional pressures of providing care in the home, the crisis has halted progress toward gender parity in several economies and industries,” states Saadia Zahidi, managing director and head of the Centre for the New Economy and Society, WEF.

According to Zahidi, the ground that was lost during 2020 will require immediate gender-sensitive recovery strategies to prevent long-term scarring.

Last year the estimated time to attain gender equality according to the report had been 99.5 years. On our current trajectory, the 2021 report shows that gender equality will be pushed by another entire generation. It estimates that it will take 135.6 years to close the gender gap worldwide.

The 2021 Global Gender Gap Report has confirmed, with real numbers and data, all our fears of the pandemic having pushed us back by several years in equality and empowerment. With the virus still prevalent, and the impact of the pandemic continuing to be felt, the chances of 2021 being an exacerbated sequel to 2020, are very real. It is imperative that we prepare for the worst in a way that women don’t have to bear the worst of it. Let 2021 be the year we don’t let the fight against the pandemic allow for a regression in our fight for gender equality and progress. Here’s hoping that the 2022 Global Gender Gap Report reveals less gaps, and more bridges having been created to cross them!