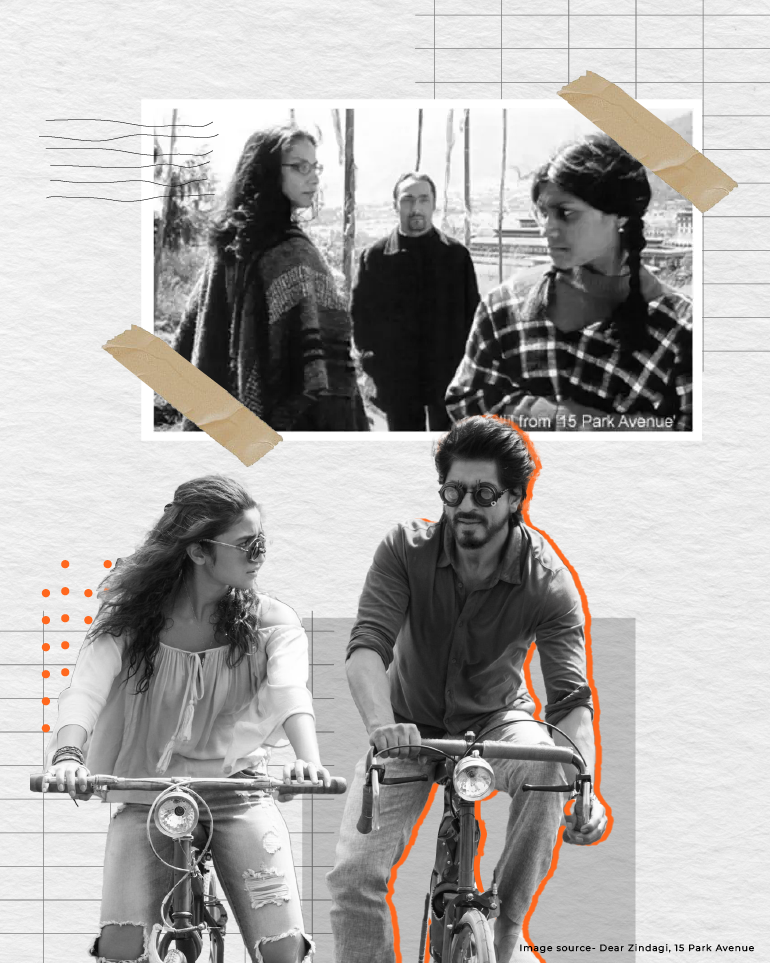 We’ve had our grouse with Bollywood for their skewed representation of mental health for a while now. With buckets of misinformation and the perennial insinuation of ‘is pagal ko pagalkhane mein hona chahiye’ Indian films often tend to misrepresent serious illnesses under the guise of being crowd-pleasing.

But there is a silver lining to this dark cloud. It is films like ‘Dear Zindagi’ and ’15 Park Avenue’ that help form this silver lining.

I went into Dear Zindagi with the expectation of simply drooling over Shah Rukh Khan’s charm –a completely unexplored therapeutic version of his appeal, a feel-good vibe that the trailers and Amit Trivedi’s brilliant music promised.

But I got out of the film barely managing to survive the immense breakdown I just experienced and with a newfound love and reverence for Alia Bhatt.

The story at its very core is something that every urban working independent woman will relate to. A millennial who’s trying to make it big in her career, is juggling relationships and a family that feels supposedly close enough to place value judgments on her life choices –now who can’t relate to that.

A career-driven woman, Kaira knows what she wants from her professional life and is not afraid to put herself out there to go and get it –unlike her personal one. Constantly battling her inner demons, Kaira is all of us in confused relationships where the ever looming “what are we” question seems to haunt us into sleepless nights.

Getting attached too easily. Realising that “He’s Just Not That Into You” when he’s probably false-signaled his way into your dreams. And having to tackle the kind of family that makes “having the talk” with that guy who ghosted you look like the more appealing option. Is there any millennial woman who can’t relate to that?

So what happens the day you start feeling that this might just be too much for me to take? What happens when the guy you were hopelessly in love with might be getting engaged to another woman? And what happens when your work is at stake to the degree that you might have to move back to the same place you once ran away from?

The most common response we’re all led to believe is the only way out: “It’s Just A Phase” or “It Will Pass” or one of my personal favourites “Tumhari umar ke logo mein yeh sab toh chalta hi rehta hai”

But Dear Zindagi breaks out of this inescapable rut that has been so normalised and leads Kaira to seek the help that she very clearly needs.

While conventionally, Bollywood’s go-to solution for any emotional or mental issue is to go out there and find your ‘sachha pyaar’, Dear Zindagi seeks out legitimate solutions for Kaira’s problems; rather than romantic ones.

So Kaira, in all her confused and sleepless predicament seeks help. Therapy for the longest time has been this taboo that we’re yet to accept as a viable way out. The journey to relieve therapy from its stigma is one that is yet to be traveled. But Gauri Shinde takes a bold first step into this journey.

By making Kaira’s character as relatable and someone who’s going through similar issues as several others and by finally showing her taking the drastic decision to go into therapy, Gauri Shinde makes the idea of therapy accessible to everyone who relates with Kaira.

In one brilliant scene when Kaira’s domestic help seems fairly confused as to why she is seeking therapy (the representation of everyone who is incapable of grasping the ordinariness of it all), the response is something that should perhaps have a poster of its own next to the film’s. Kaira responds with an analogy that makes the concept so ordinary and so viable to the common mind –just like how we visit a doctor when we feel sick, therapy is a similar consultation with a doctor for your mental wellbeing.

Shinde does not only normalise therapy by making her protagonist take this leap but also the scenes between Shah Rukh Khan and Alia Bhatt in itself have been designed in a way that they appear nothing but conversational.

The entire notion of therapy has been dealt with in a way that it is devoid of any labels. The film does not throw around medical terms to address Kaira’s problems.

She is intermittently anxious but is not defined as someone who has anxiety. She is sad but it is not labeled as depression. She has had a rough and distant childhood but that does not paralyse her day-to-day life. She is simply a woman who has seemingly hit rock bottom and seeks the assistance required to help bring her out of her troubles.

By not building on incomprehensible medical jargon, the film normalises the notion of therapy. It recreates very routine and ordinary issues thereby making therapy an option both available and viable for everyone out there. By not seating Kaira in overly dramatised or life-altering settings, the film says it is okay to go to therapy when you’re just simply not feeling up to it.

Remember the scene when Kaira falls off her bicycle and asks her therapist Dr. Jahangir to help her up? While he humours her and refuses to help her up, symbolically leads her to a place where she can help herself. That’s what therapy is.

It does not give you a set of prescriptions that can help you. It brings you to a place where you are equipped to help yourself.

Having said that, the film is certainly not without its flaws. Dr. Jahangir Khan is a glorified therapist and Shah Rukh Khan’s portrayal might motivate you to look out for a charming therapist. But you shouldn’t go into therapy expecting to find a quirky therapist who compares boys to comfy-chairs, plays kabaddi with the waves, takes you out cycling or makes weird yet funny analogies. In all likelihood, you’ll be sitting in a dull chair, talking to a wise calm and experienced therapist who’s clinic is nothing short of any other doctor’s.

Unlike Kaira, you don’t need a cute therapist with a stubble and an aesthetically designed clinic to help yourself. But your takeaway from the film should be that a therapist is to your mental health what a general physician is to your physical one.

While Dear Zindagi helped normalise the idea of therapy and helped an entire generation grapple with the concept that pain is relative –much earlier in the time chronology, ’15 Park Avenue’ helped open up a conversation about the severity of mental disorders.

This film is perhaps one of the most accurate representations of mental illness. Abstaining from any kind of glorification, heroism or even disgust; this film in its message helps clear the inherent bias that is imposed on an individual suffering from a mental disorder.

The notorious 90’s of Bollywood cashed on a lot of misrepresentations of mental illnesses –portraying characters suffering from mental illnesses either as people whose obsessions drive them or as downright criminals or even as those who belong to the infamous world of a ‘pagalkhana’.

Take Shah Rukh Khan in ‘Darr’ (irony much? a commendable growth from playing an obsessed criminal to a reliable therapist), or Ajay Devgn in Deewangee with his pretend-schizophrenia and the guilty pleasure film for a lot us millennials today –Bhool Bhulaiya with a brilliant Vidya Balan but an albeit skewed representation of mental disorder that very conveniently bleeds into supernatural realism. Bollywood simply couldn’t deliver a sensitive narrative for mental illnesses –until 15 Park Avenue.

15 Park Avenue rejects the disregard that mental illness stricken characters are subjected to by imposing them to the margins of the society. This is a film that charts the story of Mithi (played by a brilliant Konkona Sen Sharma) –a 27 year old former journalist who suffers from schizophrenia.

Conventionally story arcs would revolve around characters without any disability but Aparna Sen gives Mithi the chance to reclaim her narrative and gain control over her own story. We don’t hear about her troubles, her challenges and the details of the world she has created for herself from anyone else –but her.

Mithi believes that she belongs to a place called 15 Park Avenue with her husband Jojo and five kids. It is established right in the beginning that this place and this life that Mithi speaks of with so much conviction does not exist. But the fact that she believes the contrary and spends the entire film’s run-time looking for this ‘imaginary’ place is not made out to be a problem.

As surprising and nerve wrecking the audience and everyone around her might feel, and as important as it may be for everyone to let her know that what she is seeking does not exist –it is the manner in which Mithi communicates her desires that makes us feel bad about even trying to make her snap into our version of reality.

Mithi has an extremely easy and unimposing way of letting everyone know how she feels. Contrary to the popular belief that mental illness comes with its own baggage of aggression and occasionally violent behaviour, Mithi saliently looks for her home without troubling or expecting anyone to help.

In one rather heart-wrenching scene when Mithi’s sister Anjali (played by a heart warming Shabana Azmi) tries to reason with her about her delusions and tries to explain to her how everything she believes in is imaginary, Mithi throws back a question that shows her endearing clarity within herself.

“How would you like it if I told you, you’re not a professor, only imagining it?”

Mithi has been allowed to believe in her imaginary world. Yes, she is not well but that is okay. The need to treat her, or make her better (according to conventional standards) or let her know that she is sick has been vehemently stripped off. And in the process the message that surfaces is one that screams sensitivity.

Even in Mithi’s quest to find her home, the undercurrent theme is that of hope. She never gives up hope and is sure that she will find it someday. In various scenes she’s been shown nursing her children, caressing them, scolding them, nurturing them because she believes and is confident enough that she can do it herself. She does not need anybody to help her out of this world that she has created and that is okay. Because that is her world.

As absurd as this sounds, Aparna Sen covertly and brilliantly portrays the sensitivity that is required in dealing with patients of mental illness. She gives Mithi ample space for her to be heard thereby validating Mithi as someone the audience can feel attached to and understand where she’s coming from.

This immensely sensitive and heart-warming portrayal of an illness deemed so severe and so far fetched that it’s been placed miles away from the realm of being understood, is something that Bollywood can certainly do more with.

Having protagonists suffer from such mental health issues helps begin a dialogue. A conversation that can at least begin to understand what is it that is required, what kind of help is it that must be looked out for and finally, how the world can respond better to such needs and help create a society where mental illness is not viewed with the taboo lens.